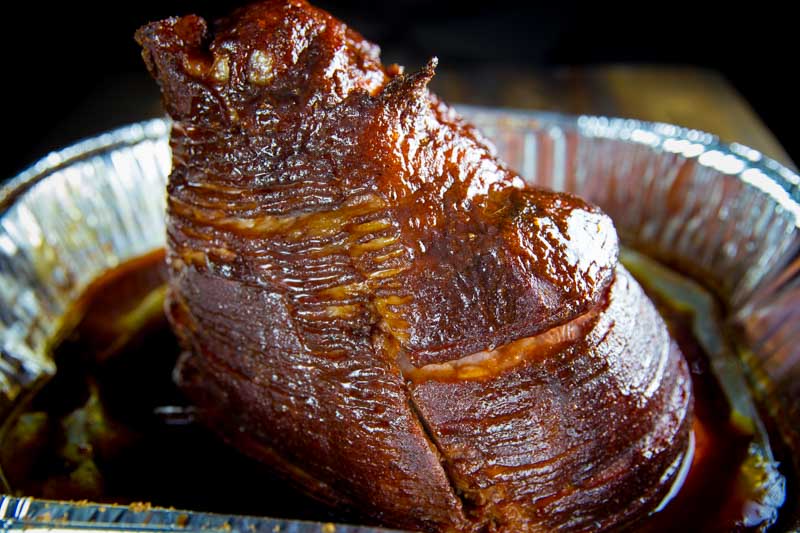 Hello again and thanks for visiting!

Smoking a Brined Split Turkey Breast last weekend gave me an opportunity to try my first Double Smoked Ham. This holiday recipe is easy, a great use of your BBQ pit, and turns out a delicious meal with a copious amount of leftovers. The reason this is called a “Double Smoked” ham is you start with a precooked spiral sliced ham and warm it up in your BBQ pit. The trick is in the glaze you make to bring out all the flavor of the juicy spiral cut ham. Now sit back, grab a nice glass of Apple Cider, and enjoy this post for Glazed Double Smoked Spiral Ham.

For the rub I used an equal mix of Sucklebusters Texas Pecan BBQ rub and brown sugar. I added some cinnamon and nutmeg for some extra holiday flavor.

Sit the spiral ham upright in a aluminum pan and rub it with the homemade mixture until fully covered to prepare the ham for the long smoke ahead.

Set the Big Green Egg up to 250° using the convEGGerator

for indirect cooking. I used a mix of pecan and apple wood chunks for the smoke. Once the temp stabilizes and the smoke is thin blue coming from the top of your egg it is time to place the ham in. Note: Keep the ham in the pan as it will catch the glaze drippings as you apply it later in the cook.

The goal is to get the ham up to 140° but not over as it will dry out if you do. The cook should take 2-3 hours depending on how big your ham is. So, watch your internal temp.

For the glaze, in addition to the brown sugar caramelizing from the rub, I applied Sucklebusters Honey BBQ Glaze every 30 minutes while the ham cooked.

When the ham hit 140° internally I pulled the ham, let it rest for 10 minutes, and served. This is so delicious and a great way to serve a big crowd during the holidays!