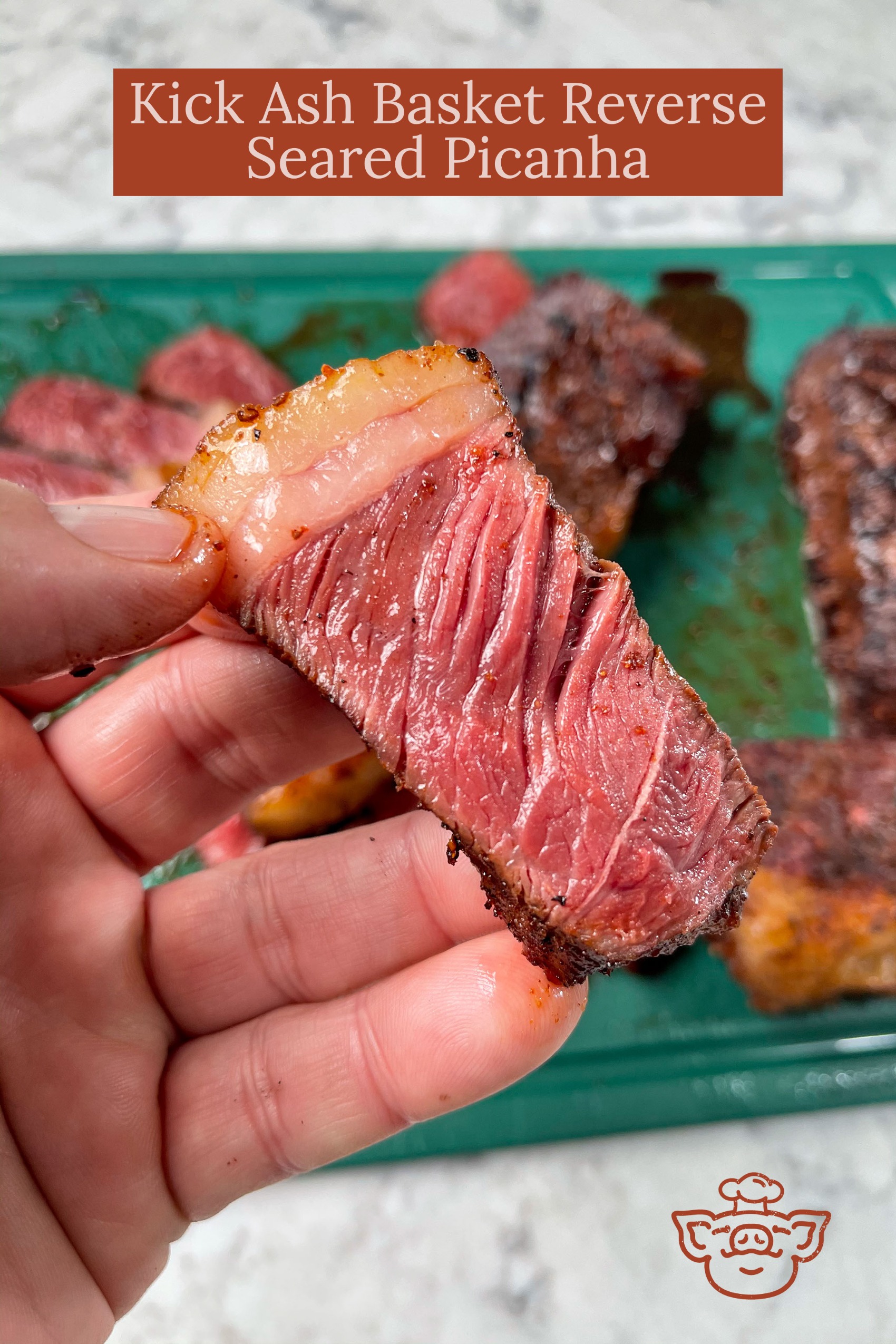 The number one question I get asked when someone buys a new Big Green Egg is, “What accessories should I buy”?  Without hesitation I tell them to get a Kick Ash Basket first. The thing new Big Green Egg owners struggle with the most is temperature control. Owning a Kick Ash Basket helps every Big Green Egg cook keep their environment clean and free of ash allowing for greater temperature control. However, the folks at Kick Ash added two new products to their line up that make this a MUST HAVE for every BGE or Kamado grill owner: the Kick Ash Can and the Kick Ash Divider. I had the pleasure of trying these new devices out on my Big Green Egg XL and this post shows you how to use them to reverse sear a steak. Now sit back, grab your favorite beer, and enjoy this post for Kick Ash Basket Reverse Seared Picanha.

The premise of the Kick Ash Basket is simple… it replaces the cast iron charcoal grate in your Big Green Egg allowing you to “shake” the basket after every cook removing the spent ash and leaving usable lump charcoal. So much easier than raking the ash and cleaning the charcoal grate vents. 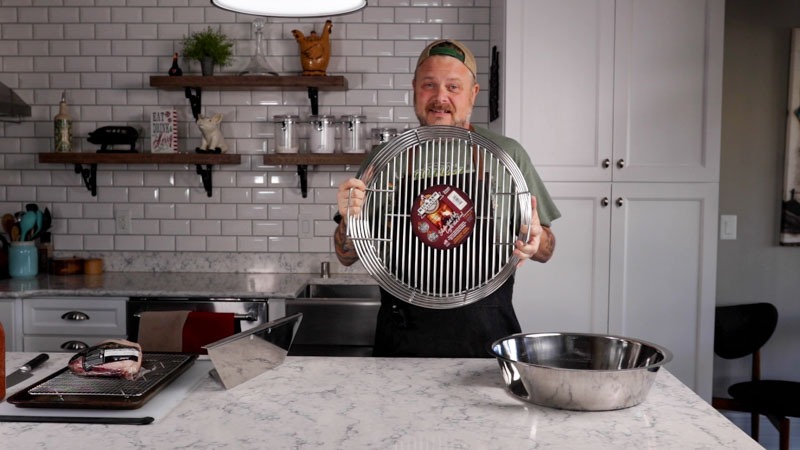 Now with the Kick Ash Can, all of that ash that falls after shaking the basket is collected in the can which makes for easier disposal.

Throw in this Kick Ash Adjustable Divider and now you have a way to divide the charcoal in your basket for a 2-zone grilling setup. In other words, you have a hot side and a cool side making reverse searing so much easier than it has been before! I will walk you through the setup using my Big Green Egg XL and a sample cook so you can see all of this in action. 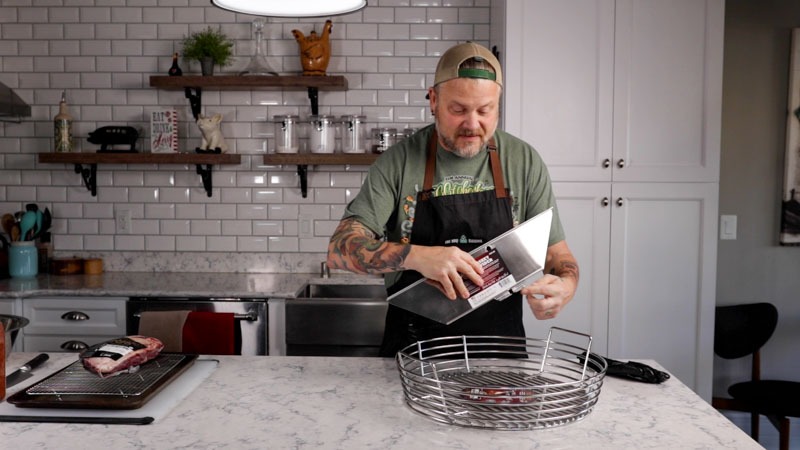 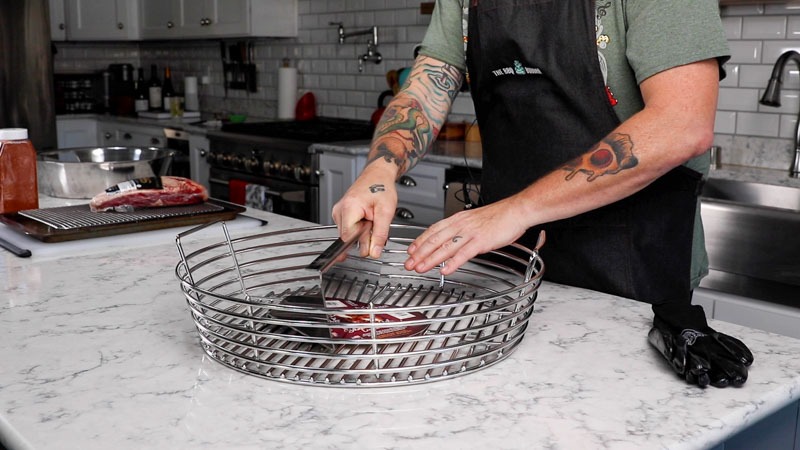 The first thing to do is clean out your Big Green Egg completely. Make sure to get all ash and debris out of the fire box and remove the cast iron charcoal grate. 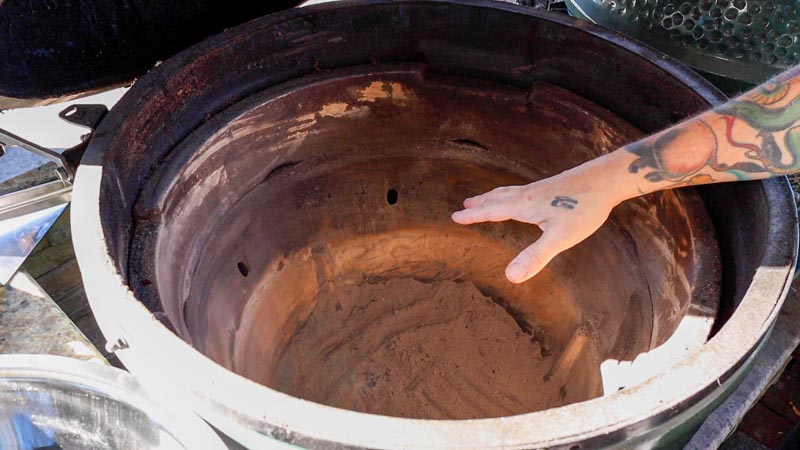 Next, place the Kick Ash can inside with the opening facing the direction of the bottom draft door. 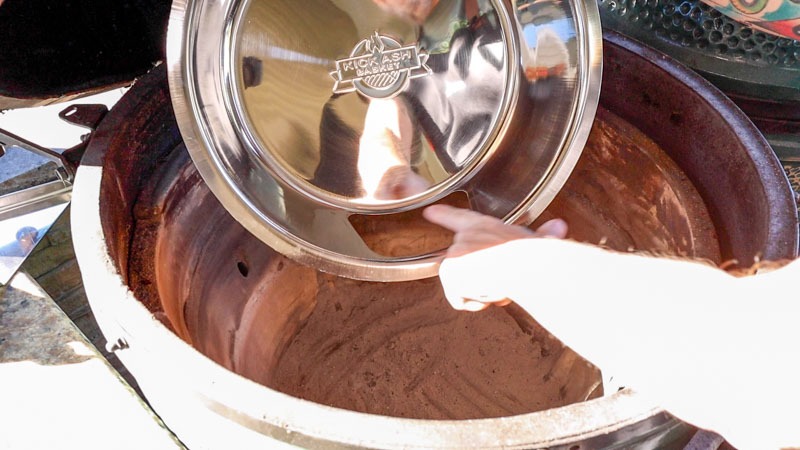 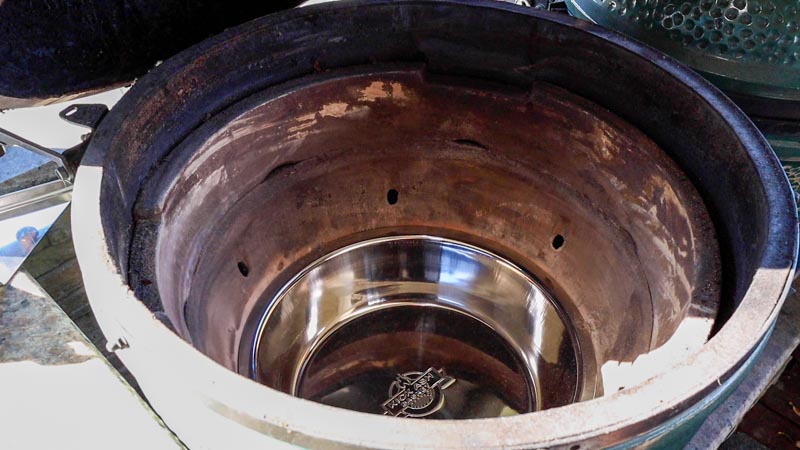 Place the Kick Ash Basket on top of the can. 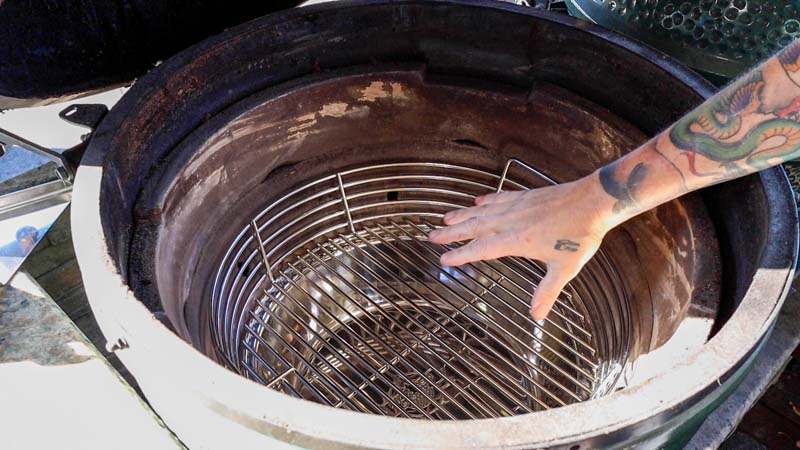 Now, place the Kick Ash Divider in the basket and lock it in place giving you equal halves of the basket exposed. Fill one side with lump charcoal and light as you would normally for a high heat cook.

NOTE: I inadvertently put the lump on the side of the dividers with the stabilizing bar on the bottom which could impact airflow. When doing this for yourself place the lump on the opposite side. 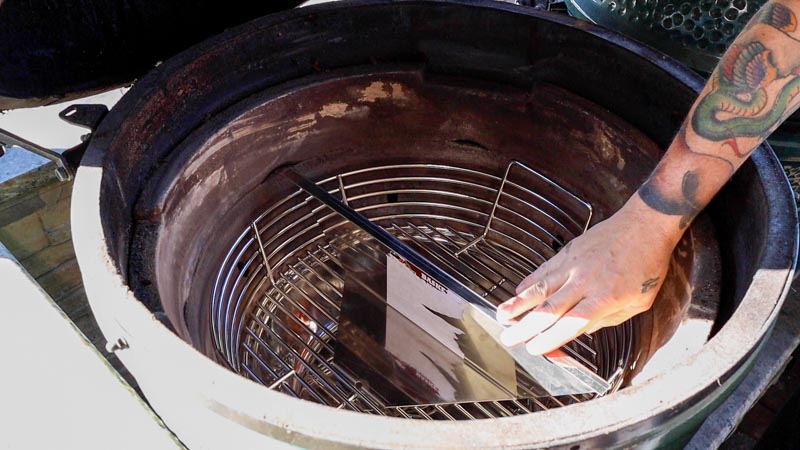 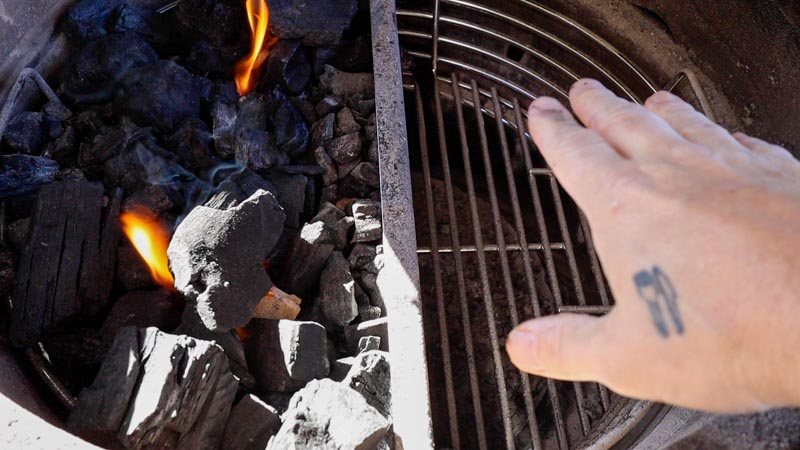 Once the Big Green Egg is lit and the temperature stable at 300°F place your grilling grate over the setup and put the steaks on the indirect side (i.e. the side with no charcoal). 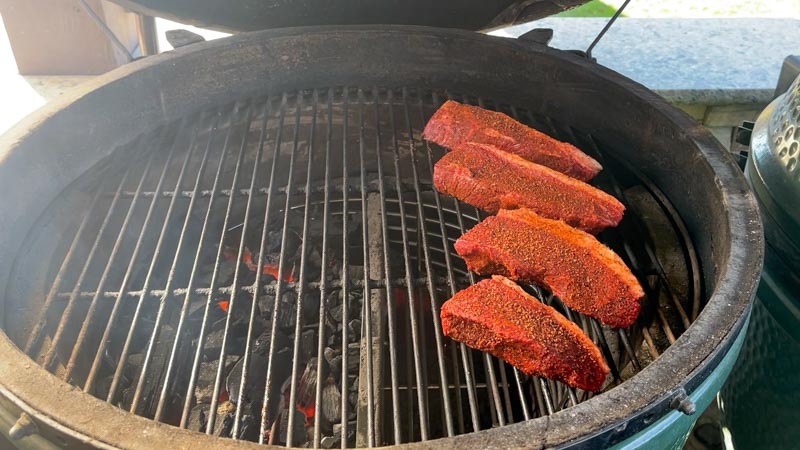 Cook the steaks, flipping once in the opposite direction of the heat source and pull when they measure 115°F internally. Let them rest while you open the vents to increase the temperature to 500°F. 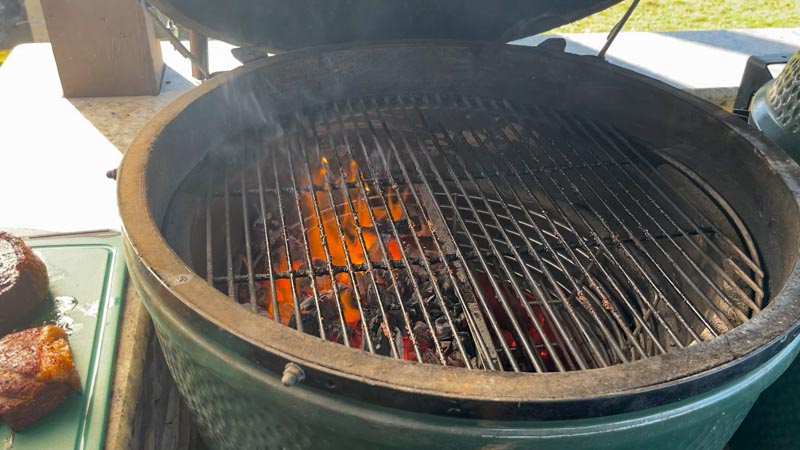 Once the Big Green Egg is up to temperature, place the steaks over the lit charcoal (i.e. the direct side) and let them cook for 90-seconds per side. Rest the steaks for 10 minutes and you will have the PERFECT reverse seared steak thanks to Kick Ash Basket. 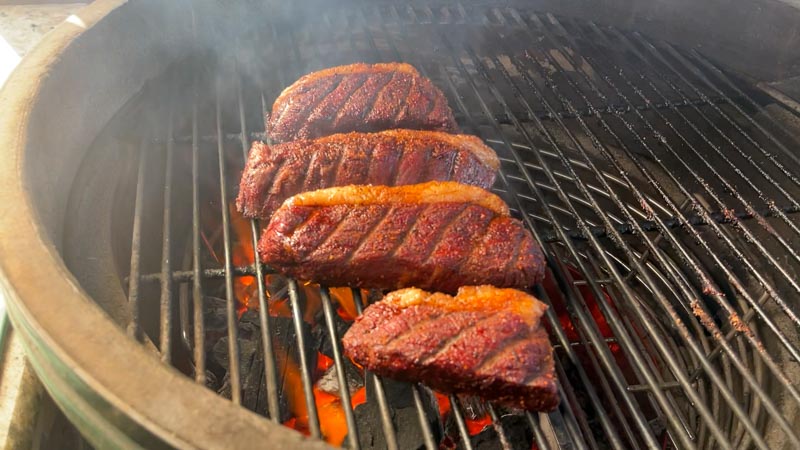 Wait until the coals are cooled down and you can easily handle the Kick Ash Basket (these photos were taken the next day). Lift the basket by the handles and shake vigorously. All of that ash will drop down to the can. 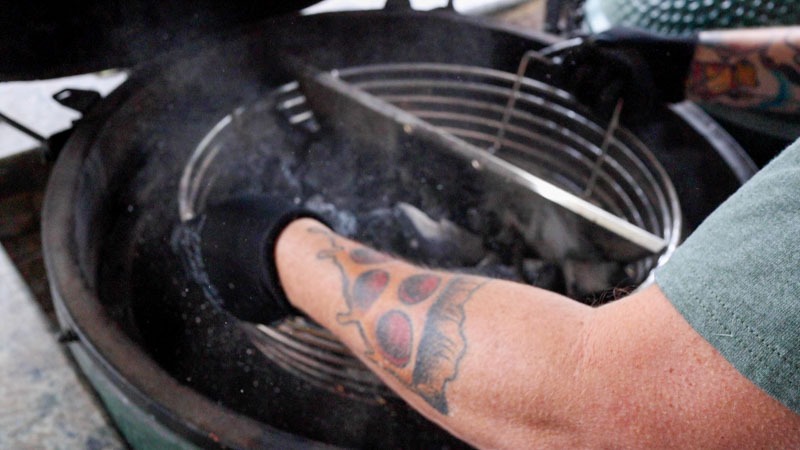 Remove the can and dump the ash and debris in a garbage can. 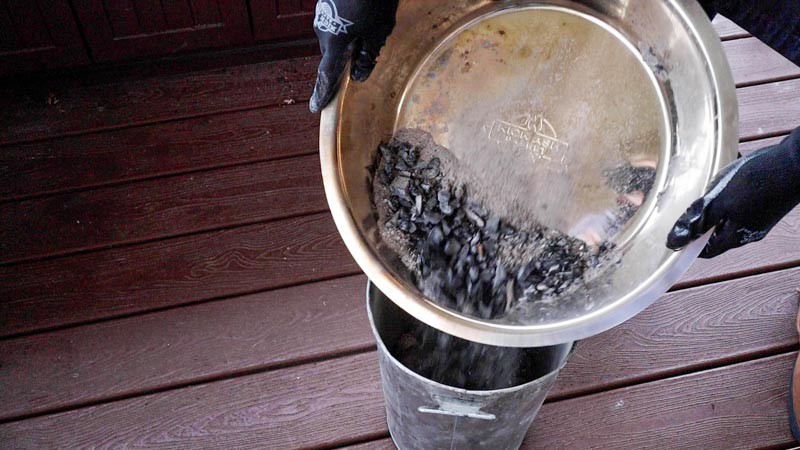 Now you have usable lump charcoal ready for your next cook. I am not sure about you but… that is totally KICK ASH!!! 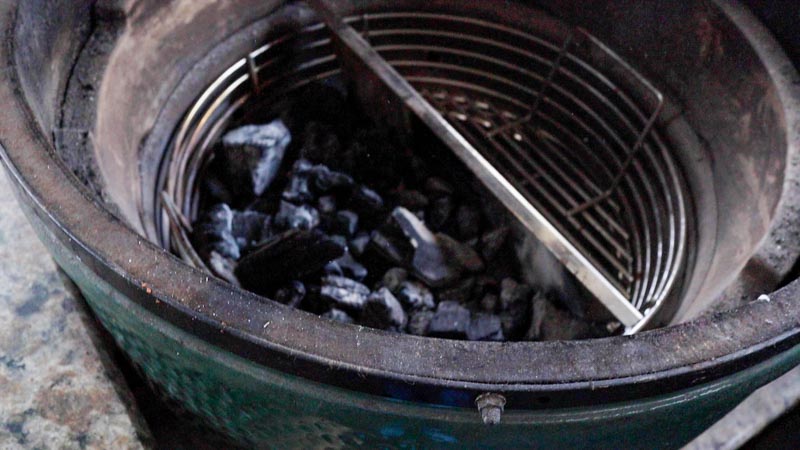