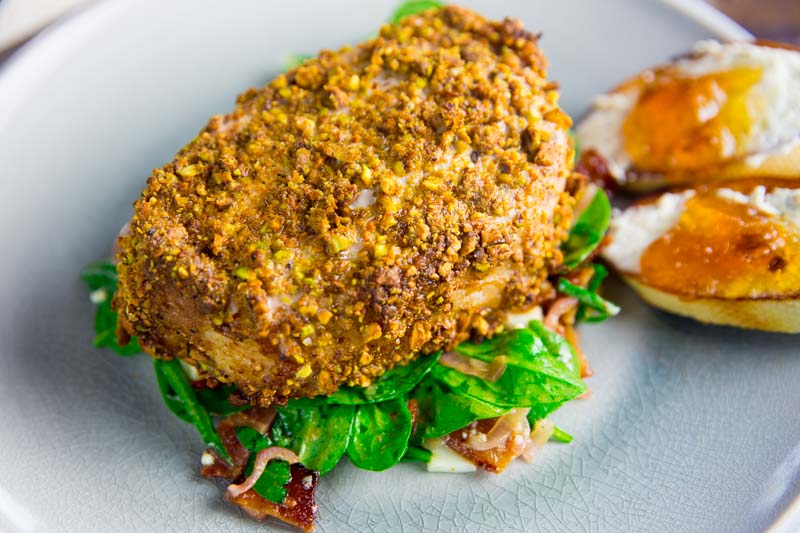 This recipe is in response to yet another chopped challenge issued by the Big Green Brotherhood. For this challenge the Brotherhood partnered with Unicoi Preserves which is a small batch, hand-crafted preserve company located on Georgia’s Unicoi Wine trail.  As with the other challenges, this was a fun way to create a new recipe based on mystery ingredients several cooks were presented at the same time. Now sit back, grab a cold glass of Pinot Gris, and enjoy this post for BGB Chopped Challenge Pistachio Crusted Pork Chop.

Our basket contained 4 ingredients: baby spinach, pistachios, french bread, and Unicoi Preserves Apple Cider Pepper Spread. Think of the best local apple cider vinegar mixed with fresh jalapenos and that is what you get with this small batch preserve from the great state of Georgia. Sweet, tangy, and spicy, this pepper spread is so good!

With the pistachios, I covered boneless pork chops with Dijon mustard and then rolled them in a mix of crushed pistachios, salt, and cayenne pepper. I set the Big Green Egg up for indirect cooking with a temp of 400°. The pork chops roasted for 35 minutes until the reached 140° measured with a thermapen

With the Unicoi Preserves Apple Cider Pepper Spread and baby spinach I decided to make a warm spinach salad: I boiled an egg, chopped some bacon, sliced a shallot, and measured out some of the pepper spread, red wine vinegar, and Dijon mustard.

For the dressing I cooked the bacon, removing it from the saucepan after it was browned, leaving some of the drippings behind. I added the sliced shallot cooking it until soft and caramelized. Finally, I added the pepper spread, red wine vinegar, and Dijon mustard cooking over low heat until reduced by a third.

I chopped the bacon and hard boiled egg adding it to the pile of baby spinach and finally pouring the warm dressing on top and mixing well.

To serve, I placed the mixed warm spinach salad on the plate with a pistachio crusted pork chop on top. I grilled slices of the french bread and smeared them with boursin cheese and some pepper spread to serve on the side. What a fun challenge this was and an incredibly delicious meal produced as a result!