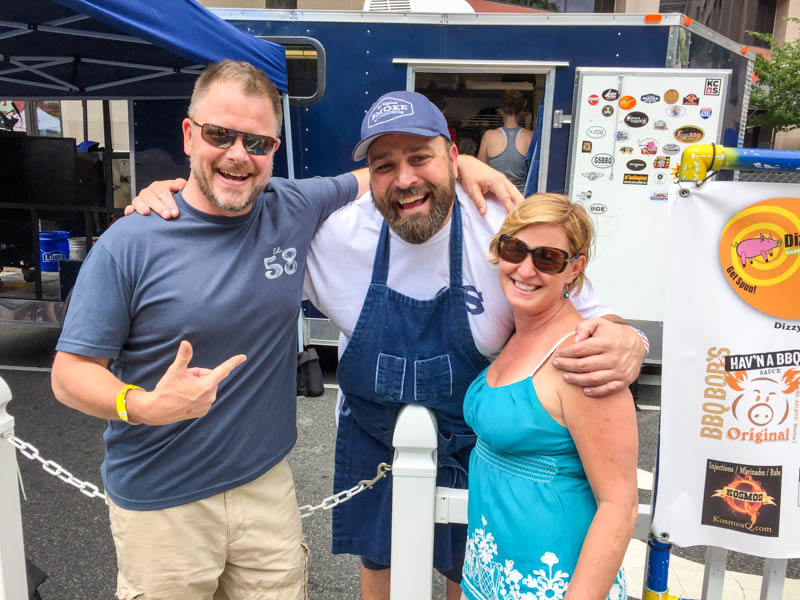 This was my first visit to the National Capital BBQ Battle in Washington, D.C. and I will just skip to the chase… it was a great event! We were lucky enough to attend Sunday as the weather Saturday was not kind to the guests. The day was filled with music, people, and of course BBQ. So, sit back, grab a cold IPA, and enjoy this post for the 2015 National Capital BBQ Battle.

The rain from the previous day made way for some unseasonably cooler weather with a nice cloud cover. Perfect for a day spent downtown drinking beer and eating copious amounts of BBQ!

First up was the section of the event featuring some of the nationally known BBQ Pitmasters.

We got to Mryon Mixon’s setup first. He has a line of smoker’s you can look at and of course lots of his famous BBQ to taste!

His team was putting out some serious brisket. It was amazing watching them put out so much BBQ to let the people taste.

We ended up getting several samples of his Brisket and His Pulled Pork BBQ. There was no consensus on which was better as both tasted so good!

Next up was Cool Smoke which is the competition BBQ Team led by Richmond, VA’s own… Tuffy Stone!

Unfortunately, we made it to Cool Smoke before they submitted their tray to the judges. As a result Tuffy was busy getting that ready and we were not able to taste any of his BBQ! We will just have to make a trip down south and visit one of his Q Barbeque restaurants!

Several bands were mixed in throughout the festival. This Les Paul’s Big Sound Experience was pretty cool and located centrally to a lot of other activities.

One of our favorite stops was the Military Chefs Cook-Off (benefitting USO Metro). This competition within the competition featured four branches of the US Military, Army, Navy, Air Force, and Coast Guard, pitting chefs from each against one another to determine a winner at the end of the weekend. As you entered in this section you got a ticket, tasted each of their BBQ selections, and then at the end gave your ticket to the branch you liked the most. Great idea!

The Army Chef has some great pulled BBQ Chicken Sliders…

The Navy chef had some terrific Pork Tenderloin mixed with a BBQ sauce.

The Air Force chef had two selections: First was Grilled Pork Tenderloin with a Watermelon Salsa and the second was Grilled Chicken with a Sriracha Mayonnaise.

…we got to the Coast Guard table! First, this guy (wish I remembered his name) was full of personality and really made spending time at the table fun. Second, the food was great!

They had two choices: Jamaican Jerk Chicken with a Mango Sauce (my favorite) and a Caribbean Pork Tenderloin with Black Beans. The Coast Guard got our tickets!!!

Next up was a really cool tent featuring the Alabama BBQ Trail. We walked through the tent and got a history lesson of Alabama BBQ and a list of all the well known Pit Master’s there.

One of them featured Dreamland BBQ which is a restaurant Debbie and I have eaten before when visiting my son in Alabama. I just so happened to be wearing the shirt!

Now we made our way to the other side of the festival and to some of the local teams competing in the BBQ Battle. First up were some new friends of ours Old Virginia Smoke (OVS).

The Safeway BBQ Battle was kind to OVS on this day! They were 1st in ribs, 2nd in pork, 1st in the Safeway meaty rib contest, & national pork grand champions!!!

OVS is one of the teams sponsored by Dizzy Pig BBQ.

Next up, we met Jenny Windsor from Black Cat BBQ. Jenny is part of a two person team (the other being her husband Jack) and is a member of the Dizzy Pig family.

Jenny was showing us how she used the Big Green Egg to cook their competition Pork Butt using Dizzy Pig’s Tsunami Spin.

So, as we are early birds and got to the festival as it opened we had yet to eat much else other than small samples. Our friends were all busy preparing their BBQ for the judges so we had to figure out a place to get something to eat… at a BBQ festival… this shouldn’t be a hard task!

Looking around we noticed an very long line in front of BBQ Masters. We started to make our way there…

Pit Master Eric Smith (pictured below) new what he was doing to draw a crowd. The grill was loaded with Chicken, Baby Back Ribs, and giant Beef Ribs. He continued to mop the grill surface causing a flare up and lots of smoke which caught everyone’s attention. As I waited in line my hope was the food would live up to the “smoke and fire”.

I wanted all of us to get a taste of the BBQ from BBQ Masters so I got a full rack of ribs. The ribs lived up to Eric’s flare (pun intended) and were delicious.

The BBQ sauce they used had peaches in the mix and that sweetness mixed with the savory sauce was incredible. Really good BBQ at this stand for sure!

After a day of walking around and eating BBQ I was feeling a bit “crispy” and “fat”. However, I kept on smiling… how could you not with a day like this behind you!?!?!

The family was jumping for joy after our day the 2015 National Capital BBQ Battle. Look forward to seeing all of you there next time. Maybe I will be competing by then!