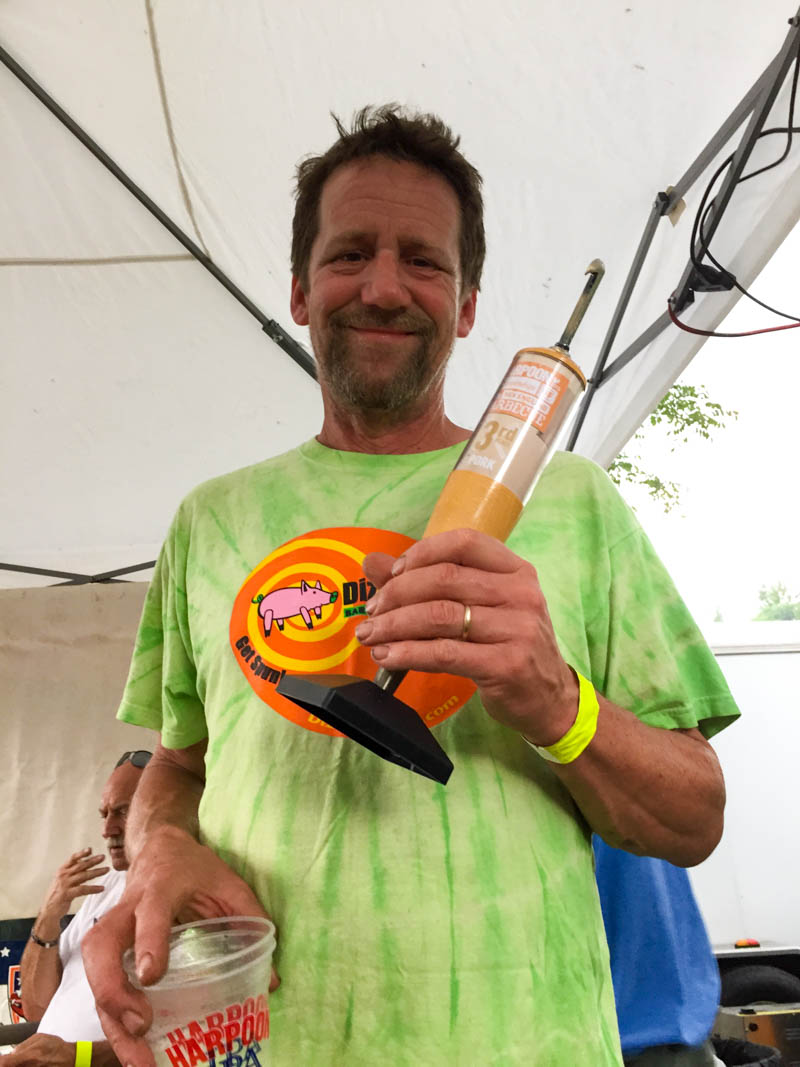 Have you ever wondered what it would be like to cook at a BBQ festival for 1000’s of people?! Have you watched countless food competition shows and thought to yourself “how exciting would it be to cook competitively”? Well, I have and when I got the call to join the Dizzy Pig BBQ Competition Team in Vermont to defend their 2014 New England BBQ title I said “yes” without hesitation! As a result you get to share in my experience joining a veteran BBQ competition team as they battled it out during a KCBS sanctioned BBQ Competition. Now sit back, grab yourself a Harpoon UFO Big Squeeze Shandy, and enjoy my behind the scenes look at the 2015 Harpoon Championships of New England BBQ.

I had a small window of time to work with last weekend and was not able to drive up with the rest of the team. Instead, I had to fly and luckily I was able to find a flight out of BWI up to Manchester, NH which was an hour away from Windsor, VT and the festival.  I knew it was going to be a great weekend when I saw an add for Big Green Egg on the wall at BWI while waiting for my plane. Fate was tipping her hat in my direction…

After a short flight I arrived in New Hampshire and drove myself to the Harpoon Brewery in Windsor, VT.

A quick look at the site map and I found the Dizzy Pig Team set up at stall #4. It was not hard to find them as it was the only cook team using Big Green Eggs!

Right next to the Harpoon Brewery is a terrific sculpted garden (the Path of Life) that walks you through the stages of life. It is hard to explain what that really means and reading that sentence back to myself it just sounds strange. Trust me… you have to do it given the chance!

Back at the Harpoon BBQ Festival it was time to get prepped for the next day. Friday night is the night to prep and then cook all the “low and slow” meats. Not surprisingly, there is a lot of organization required when participating in a festival. The KCBS judging is on Saturday and that is the focus for Friday night.

The Dizzy Pig BBQ Team Pit Masters (Chris & Brian) work to clean and prep the Brisket they will be cooking later in the evening.

Chris is using one of his Dizzy Pig rubs (Cow Lick) on the Brisket!

Next Chris & Brian start to prep the pork ribs. They are using injection to get as much flavor in to the meat as possible. The KCBS judges use taste, appearance and texture as their criteria. The judges get one chance to form their opinion of the BBQ so every aspect of the prep can be an advantage. Chris & Brian have been cooking this way for over 10 years and know how to win!

As the evening winds down several BBQ teams walk around visiting others. It is a close-knit community and you would never know they are competing against each other the next day. Chris Hart (one of the authors of Wicked Good Barbeque) stopped by to share a beer and talk rib prep with Chris.

As the evening continued other teams stopped by for a visit including the Black Cat BBQ team from Maryland. Kenny is the first to welcome folks to the Dizzy Pig tent with a shot of Tequila!

As things wind down Chris works to get the Big Green Eggs set and ready for the long cook overnight.

After the eggs are set we take another walk to the Path of Life where the Harpoon staff is enjoying time at a late night bonfire.

Back at the Dizzy Pig camp the meat is on, BGE’s are set, and it is time to turn in and get ready for the first day of the festival.

Early Saturday morning I walk in to the festival and see and smell smoke everywhere! The teams have been cooking all night and the festival grounds smell fantastic!

Prep and timing are critical today. Not only does the team have to turn in their boxes on time but they have to get ready to sell their food and product to the attendees. Organization is critical to a successful day. Chris keeps such a relaxed atmosphere at the Dizzy Pig stall. He has great music pumping all day and never shows stress. Everyone on his team is so relaxed and fun as a result it is easy to stay on task and contribute.

The Pork Butt’s have been going all night and are looking great!

The brisket has an amazing bark and the meat is ready to come off soon!

Chris loves to cook chicken and it shows in the prep. The chicken thighs look perfect and are meticulously prepared.

I was lucky enough to taste each and everyone of the categories the Dizzy Pig team turned in to the judges. I can tell you this chicken thigh was mind blowing-ly good!

As the start time for the festival is fast approaching the line continues to grown.

Chuck & Jason prepare the “Dizzy Wings” for vending. These wings were fantastic and used one of my favorite Dizzy Pig Rubs: Tsunami Spin!

The Dizzy Pig stall is set and ready to go. Let the festival begin!!!

The crowd was huge Saturday with people coming from all over the New England area! I got quite a few stares when greeting people with the standard “Y’all”.

As the day progressed time was divided between turning in the boxes to the judges on time and selling food and rub to the festival guests. After all the turn-ins and the judges scoring it was time to announce the winners. The trophies were driven through the crowd letting everyone know the winners were about to be announced.

The retuning 2014 Grand Champions paced 3rd in Pork, 5th in Ribs, and 10th overall on this day. Not what they were hoping for but not bad considering the number of teams competing today.

Back at the Dizzy Pig stall Jason starts the celebration with some Harpoon Beers!

After settling in to the evening after a long day of competing and vending we get a visit from Dan who has Palatable Pepper Products. I got a chance to taste his line up and can tell you they were some of the best Pepper Jellies I have tasted!

A great treat for the team was a dinner prepared by Sue and Teresa. This late night meal featuring seafood, pasta, capers, and a delicious sauce was the perfect way to end the day. Thank you both!

The final day of the Harpoon BBQ festival starts as the others did with a warm hello and big smile from Chris!

Today the focus was on the New England BBQ Society competition. The categories were different and allowed for some creativity. One of the dishes had to feature a Harpoon beer. Prepping for this one was fun and a great way to test your culinary skill set. The Chef’s Choice category featured Chris’ rack of lamb with a beer reduction sauce… fantastic!

Jason prepping for the final day selling the “Dizzy Wings” to the anxious crowd of BBQ lovers!

I spent a considerable amount of time selling the food and Dizzy Pig line of rubs. I had so much fun talking to people about cooking and their love of BBQ. For me this was a great experience!

The weekend ended with a 3rd place finish in Pork, 5th in Ribs, and 10th overall. But for me it was a 1st in experience! I can’t wait to do it again!!!